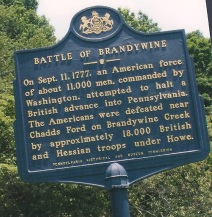 September 11, 1777 was the start of that period of the Revolutionary War called The Philadelphia Campaign.  That was the date of the Battle of Brandywine, the first major engagement of the patriots, numbering some 11,000, and the British redcoats, numbering some 18,000, in the Philadelphia area.  The battle took place down by the Brandywine River in the area of Chadds Ford and Kennett Square.  In late July, the British, under the command of General Sir William Howe and General Charles Cornwallis, had landed in the area at the Head of the Elk in Maryland, now called Elkton, intent on marching towards and capturing the City of Philadelphia, the capital of the new United States.  General George Washington thought that his Continental Army could stop the British, and he moved his army to the northernmost and southernmost fords–Wistar’s Ford and Pyle’s Ford–along the Brandywine.  The fords were low-lying parts of the river that would allow people to cross the river, and Washington figured that if the patriots controlled the fords from both ends, the British couldn’t cross over and head towards Philadelphia without a major hurting from the patriots.  Washington thought that he had the superior strategy and knowledge, but he soon learned that he didn’t.   The British, in a surprise manuever had taken two fords that Washington was unaware of–Trimble’s Ford on the west branch of the Brandywine River, and Jeffries Ford on the east branch of the river.  A resident of Thornbury Township, Pennsylvania, Mr. Squire Cheyney, hurriedly rode from his farm to Washington’s encampment to warn him that thousands of British troops were amassed along the Brandywine River at an unguarded ford that  was north of the ford that the patriots were guarding.  Washington also thought that the British had only a few thousand troops at Brandywine, but Cheyney warned him that the number was closer to the actual number of 18,000.  Washington quickly regrouped in enough time to avoid total disaster in the 11 hour battle.  However, the patriots suffered heavy losses–300 killed, 600 wounded, and 400 captured, compared to the British who had 93 killed, 488 wounded, and six missing.  The patriots had to retreat, leaving much equipment and ammunition on the field.  One unsung hero of the Battle of Brandywine was Ned Hector, an African-American private in Col. Proctor’s 3rd Pennsylvania Artillery Regiment.  As the British were overrunning the patriots, a call went out for the Patriots to retreat, save themselves, and leave their wagons and weapons on the battlefield. Hector refused, gathered his weapons and those that were left by his retreating colleagues before leaving the battlefield.  After the war, he resided in Conshohocken, Pennsylvania, where Hector Street is named after him.

The patriots marched towards Chester, and the British later marched up towards Easttown Township and the Valley Forge.  Other battles ensued from September 11–the Battle of the Clouds and the Battle of Paoli–until September 26, when the British marched triumphantly into Philadelphia.  I’ll write about those battles and what was going on with the people who lived in the Philadelphia area and the new nation up through the end of the encampment at Valley Forge on June 19, 1778,  as I continue this blog, Becoming Valley Forge, which is based on my novel, Becoming Valley Forge.  My novel shows how the lives of ordinary men and women who lived in the shadow of Valley Forge,

Pennsylvania, were changed forever during The Philadelphia Campaign in mid-1777, when the Revolutionary War battles came to their doorsteps, leading them and their loved ones to Valley Forge from winter 1777 through summer 1778.  Please feel free to email me at svance@theelevatorgroup.com or visit my book page by clicking here or go to http://www.TheElevatorGroup.com.   Until next time, peace!–Sheilah

One thought on “The Philadelphia Campaign and Becoming Valley Forge Begins–The Battle of Brandywine, 9/11/1777”